WHO supports training on Ebola readiness for frontline responders 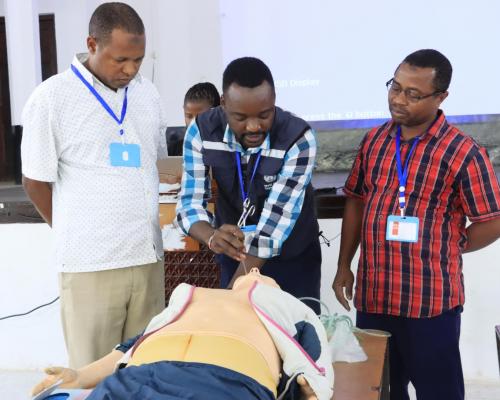 Dar es Salaam: The Ministry of Health with technical and financial support from the World Health Organization is rolling out series of readiness trainings on Ebola Virus Disease (EVD) for 3, 757 frontline health workers. Hosted in Dar es Salaam, the training gathers an unprecedented big number of health professionals and allied staff from public and private health facilities from the five (5) municipals.

“The safety of health care workers, especially the frontline staff, is critical as we step up readiness to Ebola Virus Disease,” said the Minister of Health, Honourable Ummy Mwalimu who officiated the opening of the training.

The Acting WHO Country Representative, Dr. Zabulon Yoti commended the government’s effort to ramp up preparedness and readiness for Ebola. Sharing his own experience in responding to Ebola outbreaks as a clinician and epidemiologist he said the safety of patients and health care workers is paramount during an outbreak. “In the early Ebola outbreaks nearly 90 percent of patients died. In recent outbreaks close to 70 percent of the confirmed case have a chance to survive mainly because of early identification and health care workers that have knowledge, skills and confidence to care for patients while adhering to strict infection prevention practices, “said Dr. Yoti.

Commenting on the value of the training in shaping readiness in the Dar es Salaam, the Regional Medical Officer, Dr. Rashid Mfaume emphasized the fact that all major public and private hospitals, private polyclinics, point of entry staff and community health workers and health managers will participate in the training.

“We have made sure that polyclinics are included in the preparedness and readiness because they are many compared to other types of health facilities and most people seek care at polyclinics before accessing private or government health facilities.” said Dr. Mfaume, the Dar es Salaam Regional Medical Officer.

Dar es Salaam has 285 polyclinics—small clinics, mostly privately owned, maned by general practitioners and nurses. This is the first time EVD preparedness and readiness training has involved private polyclinics, dispensaries, private and public hospitals and pharmacies. Point of entry staff from the airport, the major bus station and seaport are also taking part in the training.

The transport and commercial hub receive road and air traffic with passengers from Uganda. At least four buses and one plane arrive and leave Dar es Salaam every day, apart from private vehicles.

The increased readiness effort in Tanzania follows Uganda’s declaration of Ebola Disease outbreak on 20 September this year caused by the Sudan Ebolavirus species. As of 19 November 2022, there have been 141 confirmed cases of Ebola virus disease (EVD), including 55 deaths. Among these, 19 healthcare workers were infected, of whom seven (7) died.

WHO has been working with the government and partners to accelerate country readiness through development of a National EVD Contingency plan and a 72-hrs Response Plan; coordination of partners and resource mapping; providing regular updates and guidance on preparedness and response to Sudan Ebola Viral Disease.

In addition, WHO has supported training of 117 health care providers of different cadres from 5 regions in Tanzania Mainland and Zanzibar on EVD Case Management and IPC, produced 80,020 posters, brochures, and banners to enhance public awareness in the community and at points of entry. Additionally, SOPs and training tools on Mental Health and Psychosocial Support during public health emergencies have been revised.

Noting that in general Africa experiences an average of 100 health emergencies annually, Dr. Yoti reiterated WHO’s continued support to the Government to have an Ebola Treatment Centre that is agile enough to be transformed to deal with different health hazards.

The series of training initially rolled out in Dar es Salaam is expected to expand to cover Geita, Kagera, Mara, and Mwanza Regions targeting 240 Health Care Workers and 200 military personnel.

‘Natural gas is not an ideological issue, it’s a pragmatic one,’ says AfDB’s Adesina

Suvivors testify that tuberculosis is curable with timely treatment