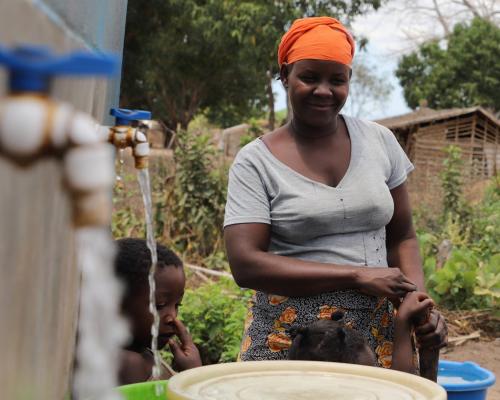 Pemba, Mozambique – Celestina Ceverano lives in Ntocota, a village in Metuge District in Mozambique’s northern Cabo Delgado Province, which has been ravaged by armed violence since October 2017.

This has led to the internal displacement of nearly a million people and caused widespread disruption to health and humanitarian services. According to an assessment by World Health Organization (WHO), around 27% of the province’s health facilities have been destroyed.

As a result, Ceverano would have to walk about 20 kilometres to the nearest health centre, an arduous four-hour journey that also carried significant risk given the ongoing conflict. The 24-year-old mother of three gave birth to her daughter, Ancha, before she could even reach the facility to seek medical assistance.

However, in 2020, the Mozambican government began providing primary health services at four temporary clinics established by WHO in three districts of Cabo Delgado, including Ceverano’s. WHO has also provided technical support to local health authorities in disease surveillance, treatment and vaccination campaigns for COVID-19, cholera and polio.

“The temporary clinic has saved lives,” says Ceverano, who can now access primary health care services just a few hundred metres from her home. “Now, mothers like me don’t have to worry. When our children have a fever, we know that we can take them straight to the clinic where they will be treated well and free of charge.”

Although one of the four temporary clinics has since closed after a new health centre was built by the international confederation Caritas, the three remaining clinics have provided health services to an average of 40 people per day over the last six months. Within that same period, they have received and treated 3479 cases of fever syndrome, malaria, respiratory infection, skin infection and diarrhoea, the most common morbidities in the region.

“These clinics have constituted a very important mechanism in areas where populations had been resettled without the availability of a nearby health facility,” says Basílio dos Mwelus, head of planning for health services in Cabo Delgado. “Structures and facilities were rapidly established and immediately allowed health staff to provide better services in the face of the adverse conditions in the province.”

Local populations have also benefitted from four new boreholes constructed by WHO with funding from the United Nations Central Emergency Response Fund (UNCERF), which supports rapid humanitarian response efforts for people affected by natural disasters and armed conflict. Constructed next to each of the temporary clinics, these boreholes provide clean, accessible water to as many as 17 500 people combined. They are also critical to maintaining good hygiene standards within the clinics themselves.

“Most of the people who use these water sources are women, children and the elderly,” says Waltaji Kutane, Climate Change and Health Technical Officer at WHO’s Mozambique office. “The conflict in Cabo Delgado has particularly affected these vulnerable groups. Safe drinking water, sanitation and hygiene are crucial to maintaining their health, dignity and general well-being.”

“I am very grateful for the borehole,” says Ceverano. “Before, the women here suffered a lot to get water, which we had to fetch from a stream more than a kilometre away.” The water from the stream was also not safe for drinking. In 2020, similar circumstances led to a cholera outbreak in Cabo Delgado and Nampula province that killed 15 people. “Today, with the borehole nearby, I can get clean, safe water for family without wasting so much time,” Ceverano adds.

Ceverano has also taken in a widow from Quissanga District in the northeast of Cabo Delgado, who lost her husband due to the conflict and arrived in Metuge with nothing. “I offered her buckets and other basic necessities that I had,” Ceverano says. “But now, she can also benefit from the services provided by WHO.”

About 20 kilometres away from Ntcotota, 20-year-old Muanassa Ramadane currently resides in the Nicavaco camp for internally displaced persons, having fled her home village in Ancuabe District, which borders Metuge to the west, due to the conflict.

“I am very relieved to have access to a temporary clinic here and I have already taken my child there when she has a fever,” Ramadane says. “As for the borehole, the water is good quality and ensures that I have enough to support my family.”

WHO’s Kutane notes that displaced families in Nicavaco have been able to collect an average of 30 litres of water per capita per day, well above WHO’s minimum requirement. This has helped these families to practice good personal hygiene and, in doing so, to contain and reduce outbreaks of diseases including cholera.

“The people living in camps like Nicavaco still have no hope of returning to their areas of origin anytime in the near future,” Kutane adds. “Within this volatile and ever-changing context, we as WHO along with our partners will continue to collaborate with the Mozambican government in its bid to ensure that they receive the humanitarian aid and health services that they desperately need.”